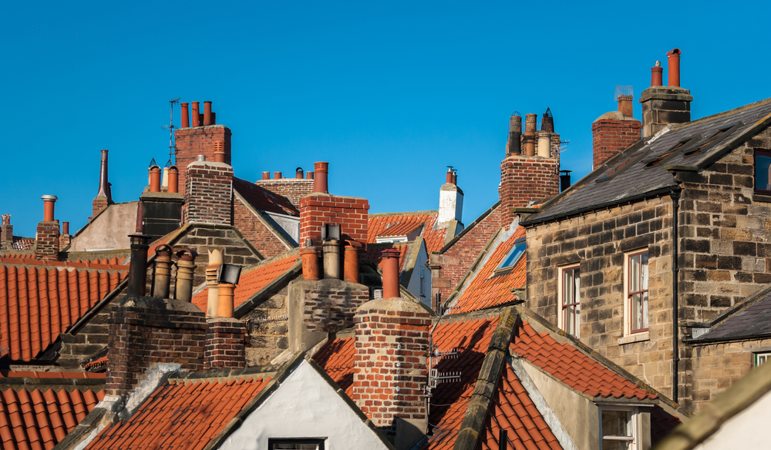 Did you know that there are 7 types of property that exist in the UK?

There are several different types of houses in the UK, including detached, semi-detached, terrace and end of terrace, each of varying style, space and affordability. There are also cottages, bungalows and flats too, but these types of property serve an entirely different purpose.

The type of property you wish to purchase will depend on where you live. For example, if you reside in a large congested city, the most common type of property is flats, whereas in towns there are often long streets of houses joined together, known as terraced houses. On the other hand, in more rural countryside locations it is commonplace for houses to be larger and standalone – known as detached – such as cottages or bungalows.

You may be wondering “which type of house do I have?” Read on for a run down of each type of property in the UK in this guide.

A run down of each of the 7 types of property in the UK:

Coined by the Brits, a “flat” is a living area that is independent and in one part of a wider building, containing a number of other residences. The building is usually split into a series of individual flats and the communal areas are shared, which include lifts, stairwells and receptions. There are a several different types of flats including a studio flat, maisonettes and 2-storey flats.

RELATED: Pros and Cons of Buying a Studio Apartment

This type of property is most popular among first-time buyers and working professionals as there is little space, although research says that two thirds of first-time buyers are now searching for houses rather than flats, with three-bedroom properties topping the majority of wish lists.

Detached houses are the type of property most of us dream of owning, as they are considered more private because they do not share any walls with other houses. Due to this, detached properties tend to be a lot more expensive and higher in demand.

Semi-detached properties are two dwellings connected by a single wall in the middle of the house. This type of property is one of the most common types of property built in the UK and is most popular among families.

Semi-detached properties offer fantastic options for homeowners to extend their property at the back and side to suit a growing family, thus giving an element of privacy, just like a detached home.

According to Andrews Property Group, semi-detached houses are the most common taking up 31% of the national housing stock. This is followed by terraced houses (23%), detached houses (22%) and flats (20%).

Terraced houses are structurally built the same and both sides of each house share a wall with a neighbour. This type of property is most commonly found in old industrial towns and cities, such as Manchester, Bath and some areas of central London.

Terraced houses became popular to provide accommodation to a large number of working-class people in the 19th century.

This type of property says exactly what it is in the same. An end of terrace house only shares one common wall with a neighbour, while the other is detached creating the illusion of a semi-detached property.

This kind of property is advantageous as they are cheaper than semi-detached properties, but still offer some privacy due to only sharing walls with one neighbour.

Cottages are small houses often found in a rural or semi-rural location. They are typically one and a half storeys tall, with the top floor being significantly smaller.

Cottages are purposefully built with thick walls to withstand bitter cold weather, along with small windows, structural pillars inside, low ceilings and sometimes a thatched roof. Sometimes cottages are also known as “chocolate box cottages” – a term coined in the mid-20th Century when scenic images of cottages appeared on Cadbury’s chocolate packaging.

A bungalow is a small house (or cottage) that is typically a single storey, or in some cases may have a second storey built into a sloping roof. This type of property derives from Bengali-style homes which are characteristically small, one storey high and detached, which was altered by the British to create what we now know to be “bungalows”.

Typically bungalows are cheap to purchase, which is why it is the perfect home to downsize to. In the era of an increasing ageing generation, bungalows are in high demand. However, in the future people may find them hard to sell and opt to add a smaller second storey in order to sell their home quickly. However, if this costs too much, occupants may decide to use a fast sale company instead.

RELATED: What is a Quick Sale Company and How do They Work?