Plans to build a Crossrail 2 station in Chelsea have been met with much disdain by residents of the infamously up-market London borough.

Said, Crossrail 2 station in Chelsea would deliver residents to Clapham Junction in approximately three minutes, connecting them to Gatwick and the south of England.

Tottenham Court Road would be approximately six minutes away and from there, Canary Wharf will be only 12 minutes away. Finally, it would take just 30 minutes to get to Heathrow. HS1 and HS2 (High speed railway lines spanning London, Birmingham, Leeds and Manchester) would both be under ten minutes away, at the new Euston St Pancras station.

However, on 30th September last year the Chelsea Society planned a meeting to discuss the proposed Crossrail 2 station in Chelsea – and it drew in quite a crowd. Opposition for the new station was wide spread and unyielding, with residents concerned that the village conservation area will be inundated, that listing buildings are at risk and congestion from work lorries will choke roads for years; 3000 residents have signed a petition against the proposed plans.

Assuming plans to build a line go ahead, work will take up to ten years to complete and is due to start in 2017. It is projected to cost £12 billion all together, of which a third will come from the Government, a third from borrowing and the final third from increased business rates. 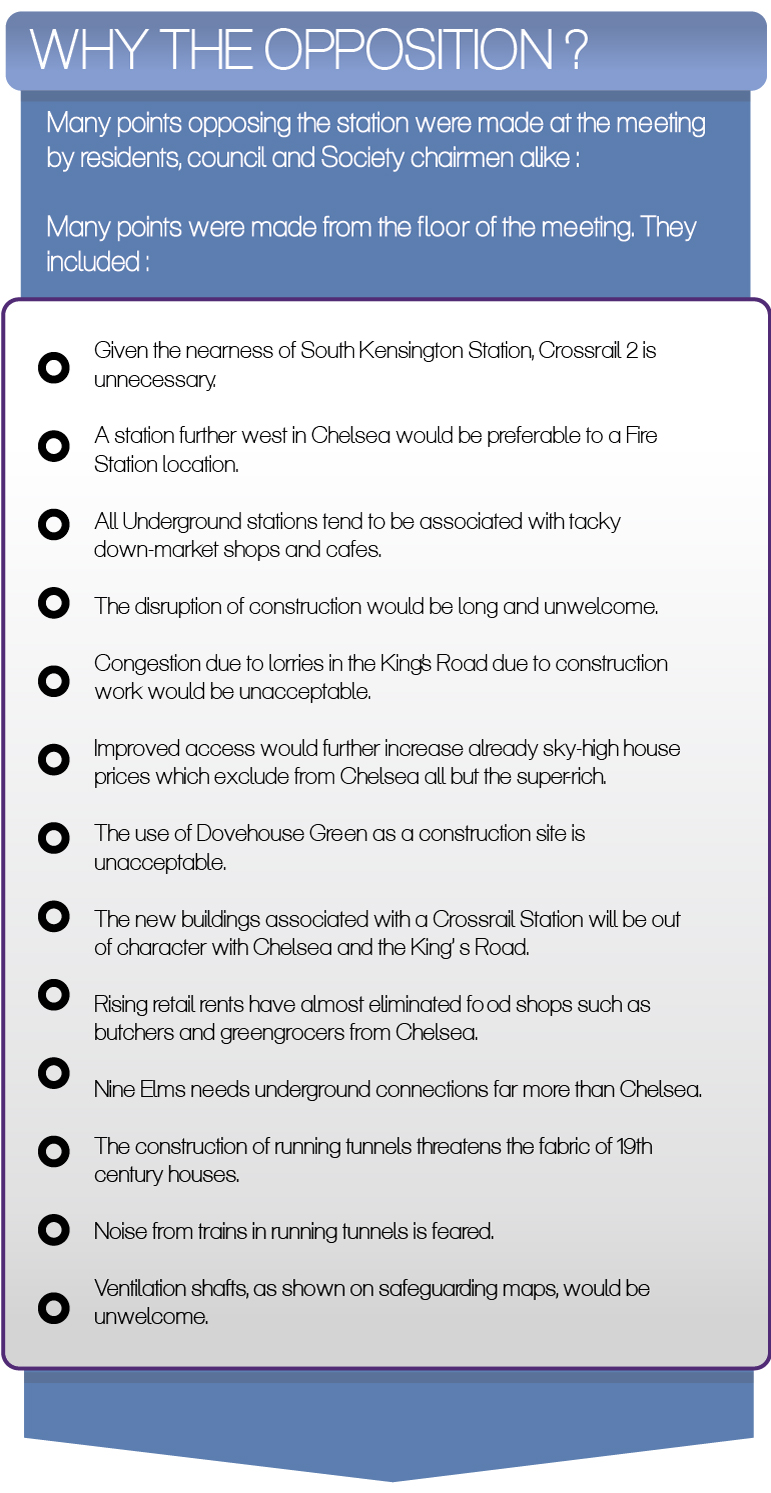 The general consensus seems to be that a Crossrail 2 station in Chelsea will destroy its charm, character and heritage. Historical sites such as Dovehouse Green and the Fire Station would be disrupted by construction and furthermore, the proposed time frame of work means that the Kings road would be closed for at least 5 years; this will cause congestion and enormous traffic on Chelsea Embankment, Fulham Road and the roads between and further north.

Opinion is divided on the effect that the Crossrail will have on house prices in the area. On one hand it is thought that improved access granted by the station will drive already sky high house prices up, leaving Chelsea reserved only for the super-rich and outpricing the majority.

Moreover, smaller retail shops, greengrocers and butchers are already struggling with the astronomical rent prices in Chelsea, and there are fears that the new station will drive these rents up even higher resulting in independent small business’ being eradicated from Chelsea, taking its charm and heritage with them.

The other argument is that the disruption to the construction of a new station would deflate house prices in the immediate vicinity.

Furthermore, London’s infamous Kings Road is feared to morph into ‘just another high street’ with 72,000 people an hour passing through the King’s Road station, inundating the narrow pavements and destroying the current shopping experience. If this is truly the case, it is thought the exclusive nature of Chelsea will be destroyed, therefore decreasing demand (and hence price) for a SW3 postcode.

“If a Crossrail station is built here it will destroy Chelsea as we know it. We are not opposed to Crossrail 2, we just don’t want a station in Chelsea,” Ms Kendall stated.

“We are well-served by two underground stations and five bus routes. We don’t need a huge Crossrail station that will cost a fortune and just create yet another cloned High Street. We love Chelsea the way it is.”

The No Crossrail in Chelsea campaign opposes the diversion of the proposed line through Chelsea, arguing instead the use of the Victoria to Clapham Junction section of railway.

say NO to the crossrail in Chelsea. We have great access to two underground stations, 5 bus routes and Victoria station is very close. Let's preserve the heritage and charm of our wonderful Chelsea.

Georgia Toffolo, one of the stars of E4’s Made in Chelsea has recently voiced her disapproval of plans for the new station, posting this picture on Instagram with caption

"Say NO to the Crossrail in Chelsea. We have great access to two underground stations, 5 bus routes and Victoria station is very close. Let’s preserve the heritage and charm of our wonderful Chelsea".

It seems opposition among residents is widespread, however the Royal Borough of Kensington and Chelsea Council have pledged their support believing that ‘high speed London’ equals ‘high speed Britain’ and saying ‘A transport revolution is taking place in London and in the country as a whole and we believe Chelsea must be part of it’.

Mayor of London Boris Johnson has assured campaigners that “There has not been a definite decision taken on any Crossrail 2 station location, and nor will there be until there is a full consultation with the public.”

This statement has given campaigners and opposing residents hope, however the future of Chelsea and transport links is still very uncertain indeed; A final conference local businesses, residents and stakeholders is due to take place September 2016, where a final decision is said to be made on the final route of Crossrail 2 and the fate of Chelsea will be decided.