How to deter burglars from your home 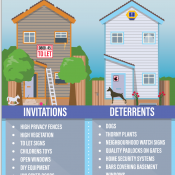 According to a study published by BBC News, ‘Police forces in England make 14 arrests for every 100 burglaries. The Office for National Statistics figures on recorded crimes have shown that there were 392,341 burglaries in 2014-15, while Home Office data illustrates that 54,466 arrests were made for burglary.’ With such concerning statistics, it is important that you offer your […]